For those of us with elderly parents, it’s almost unthinkable that anyone would be so heartless as to take advantage of them. Yet, every year, we hear about elder abuse cases where innocent elderly people are being maliciously conned out of their hard-earned money. Sadly, this problem doesn’t seem to be getting any better. Elder abuse cases are spreading around the globe, and the incident count is only growing.

For example, even in a region as relatively small as Southland, New Zealand (approximately 97,000 people), elder abuse is on the rise. In 2013, Age Concern Southland received 200 reports. 2014 saw 263. That’s an increase of roughly 30%, a staggering amount for just a single year.

Elder Abuse Commonly Caused by Those Close to the Victims

Fortunately, much of these financial elder abuse cases may have had more to do with the fact that Age Concern Southland was helping to raise awareness. Sadly, in the past, we know that many elder abuse cases went unreported because people are embarrassed about telling their stories. However, some 75% of these cases were believed to be a valid, meaning there is still a lot of work to be done.

Worse still is the fact that much of this abuse is perpetrated by people the victim knows, not some faceless scam artist on the other side of the world. In such cases, it isn’t uncommon for the perpetrator to result to intimidation tactics. Most of the time, the person going after the elderly is a spouse of one of their children. 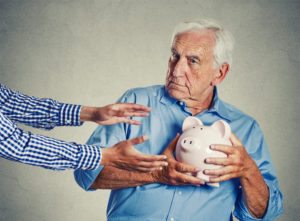 Typical examples of this type of abuse include forcing the elderly person into a facility, selling their home and keeping all the profits, claiming the senior’s pension or volunteering to go shopping on the person’s behalf and spending for themselves.

This is why a daily money manager is so important for elderly people. They’re impartial and can, therefore, provide an objective eye to the senior’s financial transactions.

Think forward, live in the moment